LED vs. other bulbs

Make no mistake, LED bulbs beat out every type of bulb on the market for reliability, efficiency, versility and longevity — AND they cost you a lot less money to both use and maintain!

Read below to understand the specific advantages LED bulbs have over other bulb types: 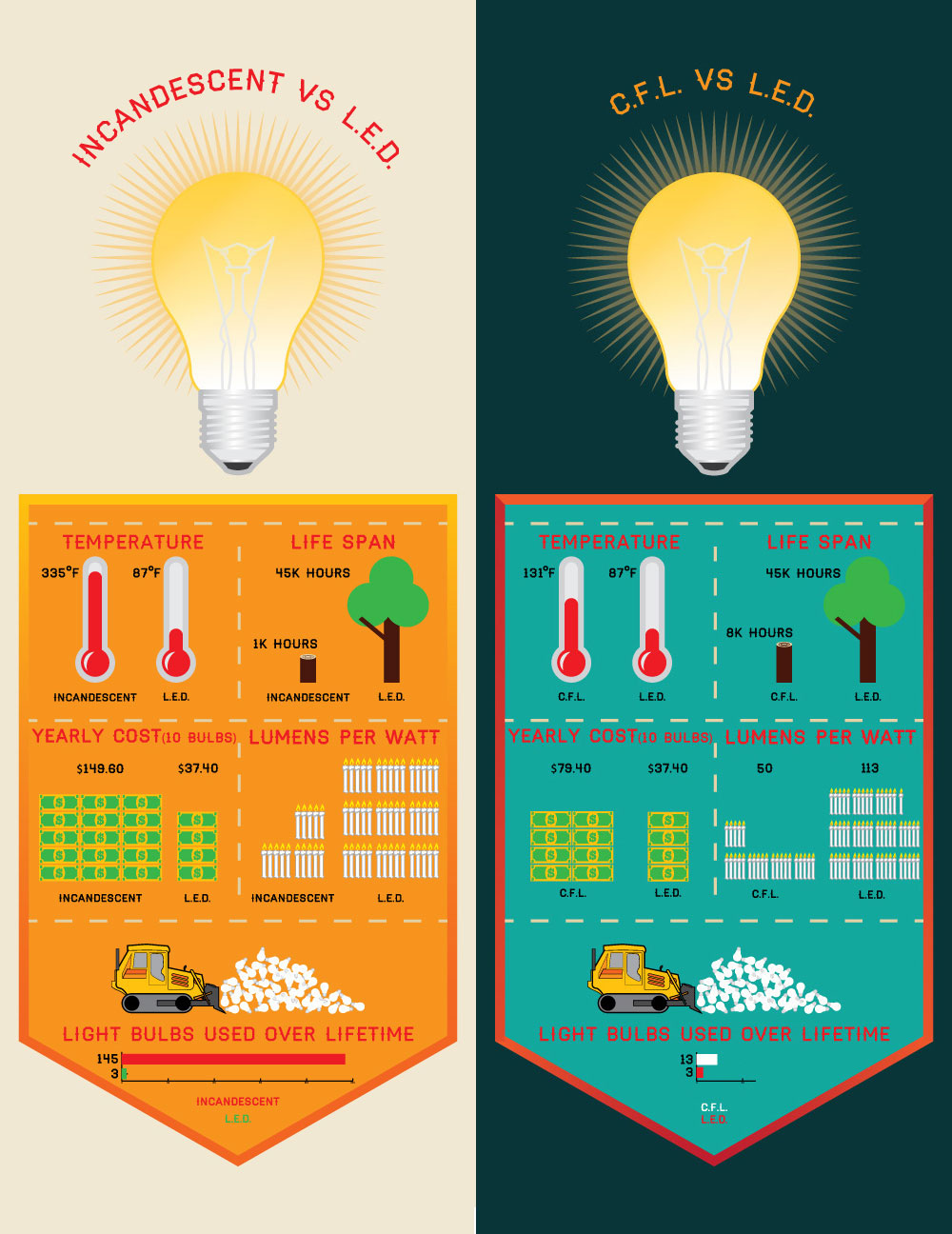 So not only do you get more light from a LED replacement bulb, they use less wattage. Our LED replacement bulbs only use 18-20 watts vs 40 watts with T8 making the LED 50% more efficient. This does not include additional power that is lost by the electronic ballast that power each fluorescent fixture. In fact, the power that a ballast consumes is more than equal to the amount of energy needed to power an LED tube. So when you look at a fluorescent fixture with 4 tubes plus a ballast, your energy consumption is actually equal to lighting 10 LED tubes.

A LED fixture uses its energy to produce light. Most lighting sources including fluorescent use heat to generate light which is why traditional incandescent, metal halide and fluorescent are losing favor with property owners.

A fluorescent bulb at the end of its life is very simple to spot, because it is DEAD, nothing left. A fluorescent T8 bulb is considered end-of-life at 60% of its light output, which equates to roughly 14,400 hours. LED replacement bulbs, on the other hand, calculate the end of life at 70% which is approximately 50,000 hours. In order to keep up with LED, you will have to replace the T8 bulbs 3.5 times

One of the most important differences lies in the fact that there is no Mercury or Glass Content with LED lighting. Help keep the world a healthier place by reducing your use of products containing mercury to keep it from damaging our ecosystem and environment.

LED replacement bulbs does not emit any light in the non-visible light spectrum (UV). UV/IR light causes colors to fade in fabrics, signage, while also being the leading cause for eye strain and eye fatigue. Fluorescent T8 bulbs emit UV/IR light while LED bulbs do not.

LED fixtures contribute little to none in regards to heat gain in a room or air conditioned space. The LED generate less heat. Less heat means that the Air Conditioning system does not have to work as hard. This is vitally important if you are doing a new build or upgrade as you may be able to utilise smaller A/C systems to heat the same area.

The beam angle of the LED replacement bulb is 110 degrees. This means that all of the light generated by the LED bulb is focused in the 110 degree area. The fluorescent T8 bulb, on the other hand, has a beam angle of 360 degrees. That means the majority of the light generated by the T8 bulb is going out the sides and top of bulb, which does not benefit the intended target.

Fluorescent bulbs require the use of an electronic ballast to manage and balance the energy directed to the bulbs by each fixture. Over time, these ballasts can become troublesome, unreliable and are very expensive to replace (usually about $70 each, plus labour). LED tubes do not require a ballast – a significant additional savings in hardware, maintenance and consumption.

If you’re in the market for finding the best outdoor flood lights for your home or business, this guide will help you. We will compare the cost, energy consumption, maintenance and longevity of three different types of flood lights so you can make an informed decision. The three types of outdoor flood lights are incandescent, compact fluorescent (CFL) and LED.

This type of lighting is very basic in structure and operation. Generally, it is the cheapest type of light to purchase, but the lease energy-efficient. The light quality emitted from incandescent bulbs is the best of the three types, especially in flood lights that project light over a wide area. However, if you’re after a more diffused light, the incandescent bulb is not your best choice.

Even better than light quality is they are very inexpensive. That’s a good thing since you’ll be changing them often because of its high energy consumption. This type of light is the most expensive to operate. The average 60W incandescent bulb has the following qualities:

(The flood light bulb is generally between 50 and 150 watts. The 60W bulb is used for comparison.)

CFLs are much more energy efficient than the incandescent bulb and costs a little more. It produces a soft, warm light and uses most of its energy to produce light rather than heat. Even though you may pay more for the bulb, you save up to 75 percent in energy costs over the incandescent bulb to produce the same amount of light. That’s a great savings considering flood lights are generally used every night for several hours per night.

The 60-watt CFL has the following qualities:

The compact fluorescent light is a big improvement over the incandescent light overall when used in outdoor lighting.

Our investigation places outdoor LED flood lights as the best to use in exterior lighting for the home or business. Until recently, LED lights were nearly impossible to use to cover wide areas because of their limited light range. However, improvements to their design have produced the wider range capacity needed and LED flood lights are now available.

That’s good news since you’ll realize even more energy savings with outdoor LED flood lights over CFLs. Here are the characteristics of a 60-watt LED bulb:

You’ll find the initial price of LED flood lights expensive compared to the costs of incandescent and CFL bulbs; however, you save so much money in energy usage and replacements costs that LED lighting costs seems almost non-existent in comparison.

First, the lumen per watt ratio with LED spot lights is much better than traditional halogen. In simple terms, this means that you can power an LED lighting system with much less electricity than a traditional system.

As you can see, the lighting effect is very similar, but the LED bulb will do it with 4.5 watts while the halogen system requires 20 watts. Saving 15.5 watts may not seem like much but when you look at the savings in an entire lighting system it becomes more significant. For example, a traditional halogen system might require 260 watts (13 fixtures @ 20 watts) while an similar LED system would only consume 60 watts. Yearly operating costs for the LED system is approximately only 20% for the halogen system, cutting that cost by approximately 80%!

LED street/parking lot lights offer substantial energy savings compared to High Pressure Sodium (the common type of HID lights used for street lighting) However, as explained below, calculating LED efficiency for this type of lighting requires a clear understanding to what is important when it comes to area illumination of this nature. System efficiency is measured with the lamp installed in a luminaire (which is, essentially, the entire lamp). It is based on how many lumens actually reach the target area, not simply how many lumens are emitted from the lamp. System efficiency is always lower than source efficiency due to three primary sources of light and power loss when a lamp is installed in a luminaire:

When considering all of the factors that affect system efficiency, LEDs provide a clear advantage over HID lamps.
Here is a summary comparison:

LED street lighting does, of course, possess the usual benefits of reduced power consumption cost (at least 50%), reduced bulb cost (over 50%) reduced maintenance costs (over 50%), immediate illumination without a warming up period, and cleaner, better illumination in terms of light quality in comparison to HID lights.